At this show I was supposed to meet up with this guy Michael who is also on the indiepop-L. One day, over the summer, he posted some snide remark of being stuck in a "no good shows" town. and i kinda scolded him....

Anyway he called and I got a decription from him but i forgot what he said later on. Cause right before the show, like the true procrastinator I am, i jetted over a couple of blocks for the *very last* showing of that big "Imperial Tombs of China" exhibit at the Orlando Museum of Art and got overwhelmed. I mean it was the very very very last showing of this exhibit in America. It's been open for like six months and it's right down the street and i never went until now.... ah the life.....

I stopped by home afterwards before the show cause Chris was coming to visit (actually to pick up his car) and i hoped he'd be there so both of us could go to the show together. Nope. Not there. <<BTW amanda, he did attend the Gainseville show. I bet you saw him.>>

So I go downtown Orlando to the Sapphire for my show. Sonora Pine was great. I love 'em but i'd rather see Tara's other band Retsin again (sigh). I bought the panties they were selling :) and the boxers too. I got the very last pair :) They played "Goldmund" - thass my favorite song by them! You know it was Kristin's birthday when Tsunami played for me? Sonora Pine ended their set with "Today is your birthday". At the conclusion of Tsunami's set they had a little cupcake with a candle burning. Then they played "World Tour" with funny lyrics like "kristin's the old maid - she's thirty now - happy birthday"... it was funny. 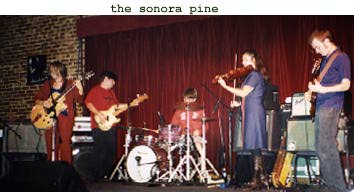 And there was Tsunami. They were *okay* this time. They played almost all of the new songs, i think only three old songs. Thass okae. I am a Simple Machines kid - i love them all. I hear they played "genuis of crack" at the g'ville show... ohmigod you know what, amanda? i just remembered another of my friends was at your show... ahhhhhh. i knew i should have gone.... michael was there too. I skipped it all for a thirty minute Mineral (& Jejune & the Get Up Kids) show.... okay i'll stop. now, where was i?

So, i was saying i've seen Tsunami play a better show. Oh, I was talking about meeting Michael. Sooooo as i was sitting there no one approached me the whole show. We didn't meet BUT i got to thinking. And it hit me. I already know who this michael character is! There's this guy i've seen at all the shows i go to for like two and a half years. He has a Versus shirt like one of mine. So i emailed him asking him this and yes! it is him. I never said hello (i never say hello at all- to anyone) to this guy but we'd recognize each other. And he figured out the same thing on his own. He looked at kickbright and saw my pictures and he's like "i know who you are" haha. funny.

This is what he wrote (don't kill me for reprinting this, michael, if you read this). It's a pretty funny read:

>I was sitting at a table by myself when a dashing young
>fellow with black hair and glasses sits
>at the table next to mine. It crossed my mind, and, in fact, I was
>convinced, that this was the self same Jeffrey I was supposed to meet.
>Had I missed the enigmatic stranger from Winter Park?

is that great or what? "dashing young fellow".... is that me? heehee.